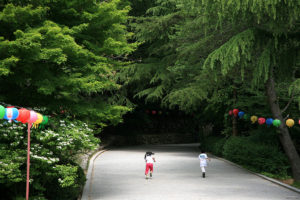 When I began this post, it was obvious that we should treat the threat of war with North Korea as an emergency, and I propose a way to do so. In this moment the stance may seem alarmist, but only because we have had a week in which Donald Trump threatened war more indirectly than usual, while bragging about the regimes we have overthrown, and his worst tweet only noted that he could call his DPRK counterpart “short and fat.” There are signs that some in Congress and in the Administration are seeking restraint, but they could well fail unless we give them a constituency.

The View from North Korea

Imagine that you live in North Korea. You didn’t choose to be Korean, and to you and 25,000,000 others, living where and how you live feels, well, normal. You want safety, security, and a meaningful life, and you care deeply about your loved ones, friends, community, and land.

Your country has been divided since 1945 because of the Cold War strategies of two great powers.

Then, 65 years ago, one of them bombed and napalmed yours into near-oblivion, using 20% more explosives than it used in WWII’s Pacific Theater. (U.S. officials estimated that one in five civilians had perished, said they had bombed “everything that moved,” and basically ran out of targets). All this to protect a pro-U.S. dictatorship in the South. The U.S. has always refused to formally end that war with a peace treaty. You know that, in order to intimidate the Soviet Union, it dropped atomic bombs on Japanese cities while that country was trying to negotiate a surrender. Your leaders know that it has brought unending bloody chaos to countries like Iraq, Afghanistan, and Libya that failed to choose North Korea’s path of acquiring an ability to retaliate.

Its current president has consistently threatened to incinerate and poison your entire country through nuclear attack if your leaders don’t give up developing the one weapon that could deter the U.S. from targeting them for “regime change.” He repeatedly insists, “Only one thing will work.” The U.S. citizenry sees these threats as equal to all the other problems raised by the unending flurry of his bullying tweets, barely noticing similar statements from their U.N. ambassador, their Defense Secretary, and others. There is no sign that people in power or the general population see an emergency in their president’s seeming readiness to eradicate your people, make Korea and nearby lands uninhabitable, and irradiate the planet.

What would you want Americans to do?

The Problem and the Solution

North Korea has consistently offered to halt both its nuclear-weapons and missile programs in exchange for an end to military threats and the hardships of its economic and political isolation. When the U.S. has shown openness to this approach, Pyongyang has followed through. This led, for example to a hiatus in its making fissionable material from 1991 through 2003. As an historian of the conflict has explained,

when President [G.W.] Bush took office, thanks to diplomacy, North Korea had stopped testing longer-range missiles. It had less than a bomb’s worth of plutonium and was verifiably not making more. Six years later, as a result of Washington’s broken promises and financial sanctions, it had seven to nine bombs’ worth, had resumed longer-range test launches, and felt free to test nuclear weapons.

The rest of the history is too long to repeat, but it demonstrates that the least trustworthy party to attempts to denuclearize the peninsula is the U.S. Most recently, our government rejected a tradeoff suggested by China and Russia: that North Korea suspend its tests and we halt the military maneuvers. 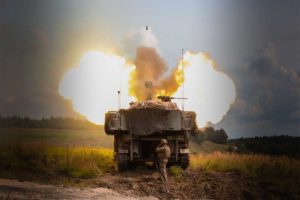 Instead, our country engages in unending provocations. We have an unprecedented three nuclear-armed aircraft-carrier strike groups in the area. We annually hold massive military exercises near the DPRK’s border and off its coasts, and there are frequent smaller-scale maneuvers at other times. We boast of having “decapitation” plans to assassinate the country’s leaders. We recently installed an anti-missile system in South Korea, then expanded it behind the back of its president. Finally, while facing no threats to our territory, the Obama administration started a trillion-dollar program to “modernize” our nuclear arsenal.

Time for a Tax Strike

An estimated 500,000 of us opposed the Vietnam War, in a small but direct way, by not paying the federal tax added to telephone bills to help finance the war.

Another, more forceful tax action can give some backbone to those in Congress, the Administration, and the military who manifest a glimmer of sanity but have no constituency behind them. Let’s suspend voluntary income tax payments until the U.S. repudiates its threats to annihilate the people of North Korea and enters peace talks. The employed can change their W-4s for zero withholding; the self-employed can stop paying estimated taxes; and we can all ignore balances due April 15. These are federal misdemeanors, as is my advocating such action, but “it is currently almost unheard of for a war tax resister to be criminally charged for refusing to pay taxes,” according to the 35-year-old National War Tax Resistance Coordinating Committee.

To insure a significant collective action, rather than a few of us hanging ourselves out to dry, we can each agree to end our part in enabling this threatened atrocity if, and only if, at least 250,000 of us do the same. You can click here to sign a pledge to that effect. (I won’t divulge signers’ names, and Change.org assures me that it will not unless legally compelled to.)

Personally, I can’t quite see war happening even if we fail to act. But I’m not willing to risk tens of millions of lives on that hopeful guess. Are you?